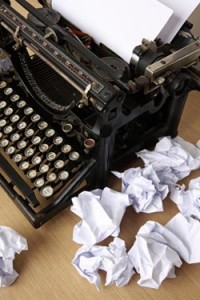 The most important thing I have to tell you can be put into two words:

That’s what separates the real writer from the person you sit next to at a dinner party who tells you that some day he’s going to write a book.  A writer friend of mine was at the dentist and just when her mouth was stuffed with steel and cotton, the dentist told her, “You know, some day I’m going to write a novel.”  My friend couldn’t answer but if she could, she would have said, “Yes, and some day I’m going to do a root canal.”

Everybody wants to have already written.  Not many people want to do the writing.  People long to wear black turtlenecks and tweed jackets with worn-to-a-shine elbows.  But who wants to do the actual work?

We get brilliant ideas – those sparks that ignite us in the middle of the night when we scramble for paper and pen, knocking to the floor everything on our bedside table.  But inspiration is only a piece of the pie.  95% is perspiration.

I wrote my first novel in three months.  I didn’t have the self-confidence to believe that if I stopped to revise, I would actually finish.  I was like an arrow – my aim was to go from beginning to end as quickly as possible, without stopping to revise.  When I look back on that time, I see myself in my bathrobe and furry slippers.  I’d pad up to my computer first thing in the morning – when I was closest to my sub-conscious, my dreams – and begin.  Then I’d hear my husband down in the kitchen calling up to me.  It was already the end of the day, he was home from work, and I hadn’t brushed my teeth yet.

Leaving all those clunky sentences and paragraphs – without stopping to fix them – felt like I’d had company for dinner five nights in a row and left the dirty dishes piled in the sink and on the counters.  The opposite of my normally tidy self.

Which leads me to the second most important thing I have to tell you:  If you want to write a book — just write it.  Before you have a chance to intimidate yourself by thinking, Gosh, I’m writing a book! Do not show your work to other people and don’t stop to revise along the way.  Both of these can be a form of procrastination.

While you’re writing, don’t be attached to results.  Don’t allow yourself to even think of publication.  Do not say the words, agent, editor or publisher, out loud.

Just before I decided to try fiction, I read a novel called Velocity.  It was written by a woman who’d just graduated from college – and she wrote an incredible, powerful book in three months.  I wanted to be an instant genius like her.  Now you remember I wrote my first novel in three months.  But the rest of the story is, I spent the next three years and three months revising.  I had a lot to learn.  A lot to fix in that first draft.  The truth is, I’ve never been an instant anything.

Which leads me to the third most important thing I have to tell you:  If I can write a novel, anybody can.