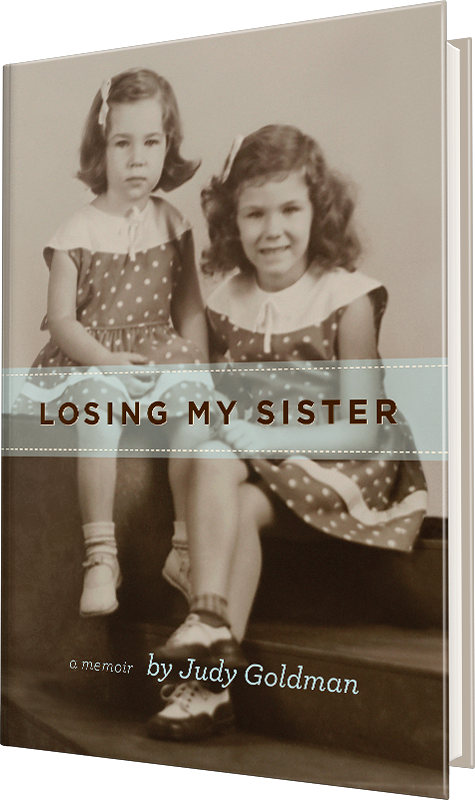 The relationship between sisters is typically the longest in a woman’s life. It can also be the most complex. Losing My Sister tells the story of two sisters who were raised to be close. Adoring your sister was as common a trait in our family as red hair might be in somebody else’s. BrendaandJudy. We were one long word. Throughout our paradisiacal, dreamlike childhood, Brenda (three years older) and I were told by our mother how close she was to her sisters, how close her mother was to her sister.

When Brenda and I were in our thirties, our parents were diagnosed with grave illnesses. Older sister Brenda had always been “the strong one.” Little sister Judy was known as “the sweet one.” I suddenly stopped following Brenda, stopped being “sweet.” Brenda, grappling with problems at home in addition to losing parents, suddenly didn’t appear strong. She even seemed vulnerable. We’d stepped out of our familiar roles; nothing was the same. Throughout the two years our parents were dying, Brenda and I barely spoke. We lost our parents and nearly lost each other. Before we reached the outer edge, we found our way back. Once again we were having long, chirpy phone conversations, sharing recipes, bringing our families together for Sunday night pizza.

But then an impending and even closer death echoed our parents’ deaths. This time, it was Brenda. Again, the two of us were pitched into unfamiliar territory. Again the two of us — and our relationship — became totally unrecognizable. Just before we reached the end, we re-discovered the purely ordinary splendor of the love we had for each other. During our last four months together, our relationship was allowed to shine like the marvelous thing it was.

Read an excerpt from Losing My Sister.

How I Came To Write Losing My Sister

Within five days, three things happened that turned my life upside down. My sister was diagnosed with bile duct cancer, my daughter found out she was pregnant with identical twins, and a daughter whom my brother had fathered forty years before found him (she’d been put up for adoption at birth).

Immediately, the title, The Arithmetic of Family, popped into my mind. The additions and subtractions within a family. Like a Dr. Seuss book — people were coming in, people were going out. I could see funny little Dalmatians wearing red and blue hats, walking on their hind legs, entering a house, leaving a house.

I tell beginning writers: You have to write about what keeps you up at night. I had not followed my own advice.

At this point, there were three sections in my book. I cut two — which left me with a haiku! No, not really. I was left with a memoir about my older sister, Brenda, and me — the book I’d always wanted to write but didn’t feel I had the right to write.

I’d explored the subject of sisters in my first novel, The Slow Way Back, using some details from my life and my sister’s life to invent a work of fiction. But I was working through the material at a distance.

What would happen if I got close, made myself susceptible to change and loss, re-inhabited those memories?

My sister and I were raised to be close. All our lives, we heard from our mother how close she was to her sisters, how close her mother was to her sister. In our family, sisters matter. We borrow each other’s bracelets, braid the other’s hair, play piano duets.

At the same time Brenda and I were being raised to be close, we were also being made finely distinct. Our parents – in fact, everyone in our world — constantly told us, “Brenda, you are your father to a T!” and “Judy, you are just like your mother!”

When I finally came to understand how we were set up for both inner and outer conflict – how do we stay close when we’re so different? – my book began to take shape. I’d found the narrative thread. The unexamined emotions. All that I had skirted in the earlier version of my memoir and in my first novel.

Now that I was getting clearer about the forces that had shaped Brenda’s and my relationship, maybe I wouldn’t feel the need to assign blame when I wrote about our conflicts. Maybe I wouldn’t struggle with what was appropriate to reveal, censor myself in an overzealous effort to protect others, worry about how I came across. I could even use the journal entries I’d made every night during the four months my sister was dying.

Still, while I was recalibrating my memoir, I sometimes heard Brenda’s voice in my head: “Judy, you know that’s not how it happened.” Was I taking liberties? Embellishing? Deceiving myself? I know that memory is often misleading. The very act of remembering can alter what actually occurred.

In the end, all I could do was keep my eye on one goal: Tell the truth, as I know it, about our relationship — the mysteriousness of our connection, its empty places, the divine harmonies.

Read an excerpt from Losing My Sister. 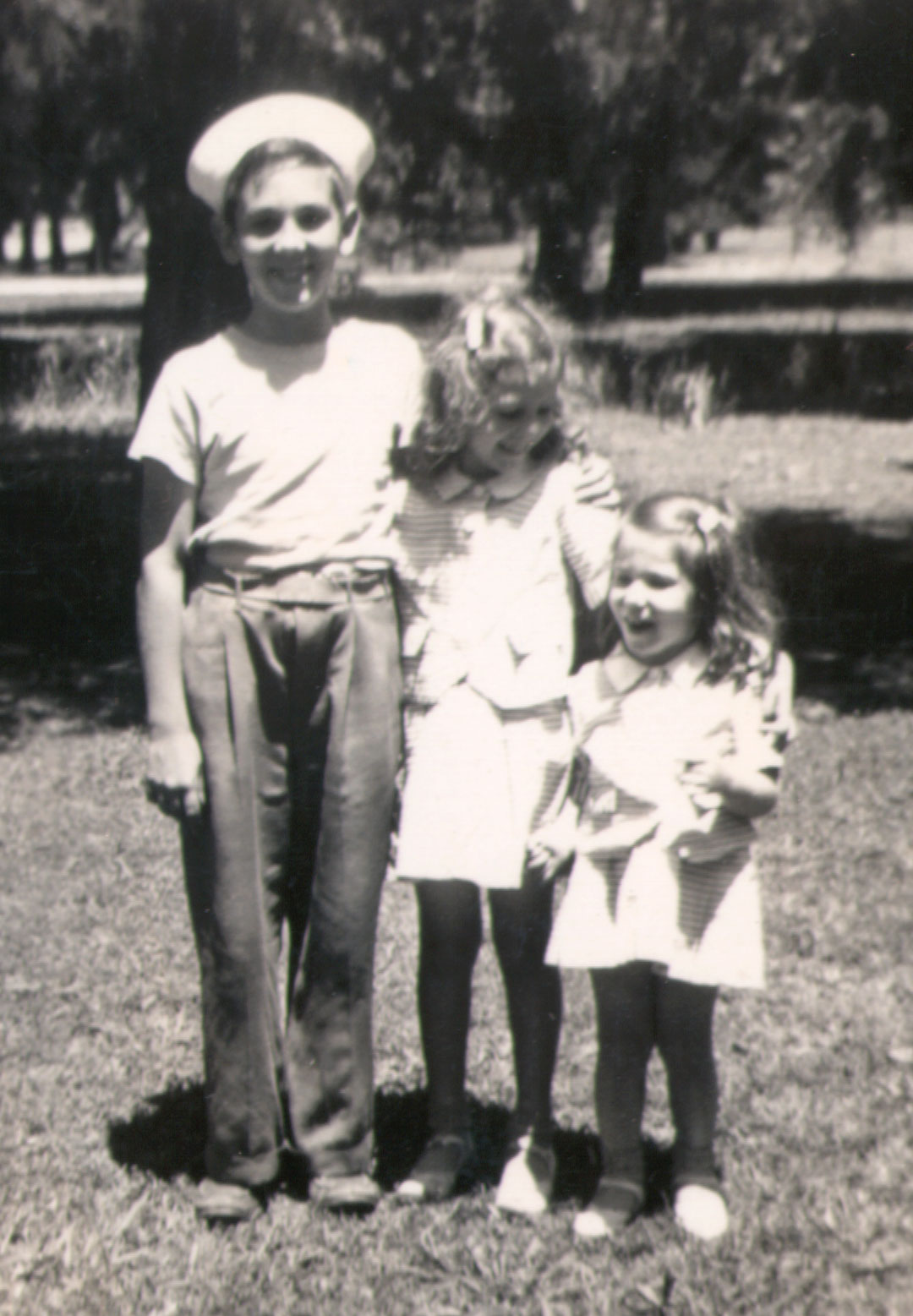 Praise For Losing My Sister

“Goldman beautifully renders the complexity of sibling relationships with candidness, tenderness, and sorrow . . . [Her] book speaks to the human ability to forgive and attain a measure of peace amid loss.”
~ Publishers Weekly

“A sensitive look at the intricacies and evolution of sisterhood and family… Recommended.”
~ Library Journal

“[Goldman’s] narrative is, in fact, full of life’s minutiae — childhood play, family dinners, hurt feelings. And yet, the sum of these small parts gives readers something profound…”
~ The Charlotte Observer

“Judy Goldman, veteran poet, novelist, essayist and teacher, has a great talent for close observation, and it shows in her new memoir… Goldman presents her family history through a collection of small events in the sisters’ lives — small, perhaps, but thoroughly parsed and observed by a writer with a poet’s eye and mentality… Losing My Sister is the kind of honest, clear-eyed memoir that asks readers to be open to their own experiences, and perhaps even learn something new about themselves. That’s a high calling for, and a lot to ask of, a family memoir. Goldman shows in this splendidly subtle work that she’s more than up to the task.”
~ Creative Loafing

“Losing My Sister reads like a vivid novel, as tensions and conflicts build to a climax. Goldman raises the familial and personal to reach universal themes: sibling rivalry, the tensions as individuals grow and change, the inevitable sorrow of watching one’s strong, perfect parents age, weaken and die, the ‘mystery of individuality and connection’ that unites and divides siblings.”
~ Wilmington Star-News

“N.C. novelist, poet and memoirist Judy Goldman is as brave — maybe braver — than [Thomas] Wolfe. Her memoir Losing My Sister is a candid, forthright and often painful examination of the complex emotions surrounding the death of her parents and older sibling — daunting experiences that she confronts without the protective cloak of fiction…. A compelling story of loss, guilt and forgiveness…. Goldman writes with objectivity and compassion and there’s no attempt at shade-tree philosophy, only the writer’s brave and honest response to human experience.”
~ O. Henry Magazine

“A vivid memoir… Losing My Sister is a tribute from one sister to another — a sorrowful, but proud grieving.”
~ Story Circle Book Reviews

“For anyone with siblings, the complexity of maintaining a healthy relationship, especially while taking care of ailing parents, will resonate.”
~ The Post and Courier, Charleston, SC

“Goldman writes with a reflective honesty and a touching poignancy…. This is a well-written and introspective look at the connection of family, the universality of relationship, and the ways in which we break away (or don’t) from the long-ingrained expectation of who we are, especially in relation to our siblings.”
~ BookNAround

“This book is poignant and heartbreaking but also inspirational. It made me hug my family a little bit closer.”
~ Jenny Lawson, New York Times best-selling author of Let’s Pretend This Never Happened: A Mostly True Memoir

“Judy Goldman’s Losing My Sister is a big, wise, heart-squeezing book. It puts between hard covers what I’d thought inarticulable — an act not unlike giving flesh to a shadow. This book will help a lot of people — people who are hurting for excellent prose, and people who are just hurting.”
~ Darin Strauss, author of Half a Life, winner of the National Book Critics Circle Award

“A moving, gracefully told story of memory, sisters, and the way that love can bridge tragedy.”
~ Caroline Leavitt, New York Times best-selling author of Pictures of You

“Judy Goldman navigates the bumpy, fierce love that she shares with her sister with equal parts passion and compassion. A memorable story of love and loss.”
~ Ann Hood, author of The Knitting Circle and the memoir Comfort: A Journey through Grief

“In this finely wrought and moving memoir, Goldman explores in exquisite detail the small and large acts of love between sisters — and, indeed, among all family members. She is able to guide us through the complex emotions of death, loss, and intimacy because her own heart, as well as her writing, is as big and profound as the word love.”
~ Sue William Silverman, author of Fearless Confessions: A Writer’s Guide to Memoir

“What this book does — brilliantly — is suggest in the very rhythm of its telling the messiness and formlessness of relationships and grief, and the redemptive possibility of arranging some order from the chaos of existence. You cannot read this book and not be moved by its honesty and grace.”
~ Michael Parker, author of The Watery Part of the World

“Judy Goldman deeply loved her sister. She tells us why, she tells us how, and she tells us how much loving hurts in this deeply affecting examination of a special sister bond broken many times before it is — at last and forever — restored.”
~ Beth Kephart, author of Small Damages and National Book Award finalist A Slant of the Sun

“There is a great luminous beauty to Judy Goldman’s writing that delights me. Few writers in America have ever written with such passion and insight about the joys and great perils of family life.”
~ Pat Conroy