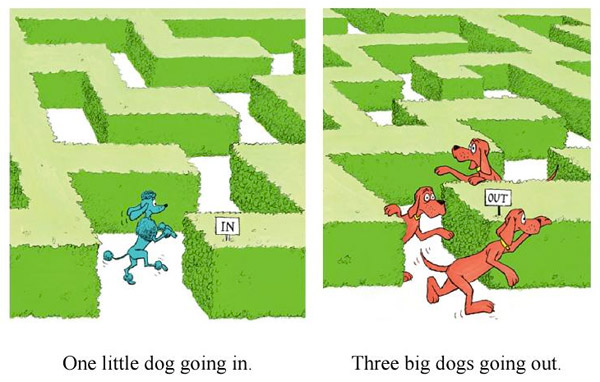 I know several writers who revise as they go. Their first draft is also their second and third. They don’t tackle Chapter Two until they have Chapter One just right.

Of course, this is a perfectly fine way to write. And you’re the only one who can decide how you want to approach the job. But let me build a case for another way:

I push to the end of my first draft, no matter how clumsy the draft seems. My goal is to go from the first page to the bottom of the last page as fast as I can, without stopping to revise, before I can intimidate myself by thinking, “Oh my gosh, I’m writing a book.” Leaving all those awkward sentences, clunky paragraphs, aimless chapters feels as though I’ve had friends over for dinner six nights in a row and left dirty dishes and sticky pots piled in the sink. Allowing a rough draft to remain rough is the opposite of what my tidy and orderly self wants to do.

But the first draft is the dream part of writing. It’s unharnessed energy. It’s the story forming its central questions. You won’t know what your book is about until you’ve written the book. Really, you might not know until years into revision.

I wrote the first draft of my memoir, Losing My Sister, in six months. I then spent the next five and a half years revising. Ann Sexton said, “The poem knows more than the poet.” In my case, the memoirist knew nothing.

Three things happened to me within five days. My older sister was diagnosed with bile duct cancer. My daughter found out she was pregnant with identical twins. And my older brother told me he’d fathered a daughter forty years before, she’d been put up for adoption at birth, and she’d just found him. Immediately, a title, Arithmetic of Family, popped into my head. People entering the family, people leaving. Like a Dr. Seuss book. I could see Dalmatians wearing funny red and blue hats coming into a house, exiting. I worked on that book for years. But then what I had talked back to me. Two-thirds of the manuscript didn’t belong. The story I needed to write was the story of my sister and me.

What’s the story you need to write? Well, first, finish your rough draft. Then, like an adolescent, your book will begin to separate from you. You’ll take that dreamy first draft and look at it analytically and diagnostically. You’ll figure out what’s present, what’s missing, what’s unnecessary. You’ll grow aware of larger implications. Only then will you come to know the story you’re well into telling.